Usually when u are playing conquest maps in everybodys multiplayer FPS games, u often notice same problems with teams and players. 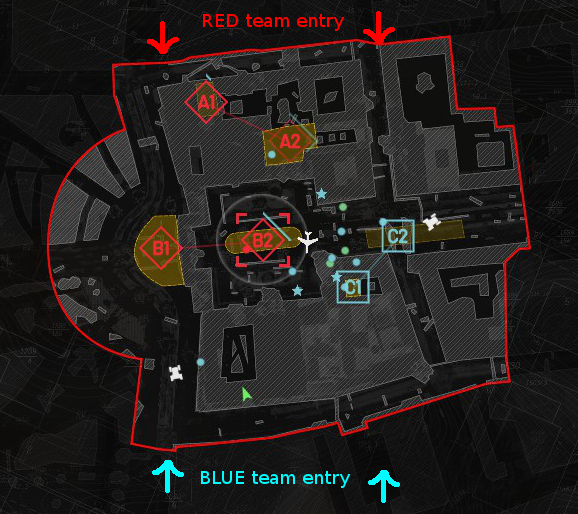 Here is a setting for a ongoing match, where red is dominating and blue is suffering. Entry points means team spawn points. In this sample is demonstrated how player minds works. When blue team is stuck and cannot expand to capture other points, they spawn to C1 and C2 and tries to face off the dominating red team. This does not make any sense, and this is what usually happens in the field. 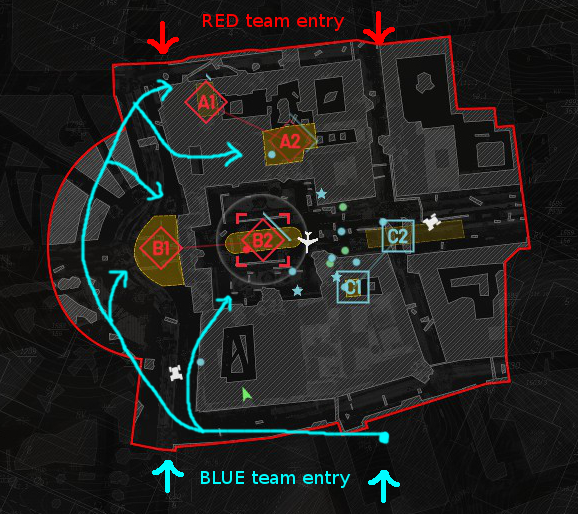 There is an entire border for spawning at the bottom of the map. From there, squads could fast and efficiently distribute themselves to multiple areas at the same time. Ongoing map shows that there are only minority amount of players trying to maneuver themselves around the hot zone between area C and area B, while most of the players are stuck in frontal attack and are losing time. Even the stars shows the blue team squad leaders stuck in the middle of the jam. Squad leaders should be those who takes responsibility and look for the angle and flank the enemy forces. But of course nothing as this simple is possible for majority of players. Nobody cares and nobody learns.

What a waste of time and potential of great maps in conquest type of games. This game is called World War 3.

And btw why people want to play snipers in a multiplayer fps? Desperate for a kill, without skill?
Posted by Kake2000 at 6:31 PM No comments: